Since its founding, Meridian Hill and its President, Ernest Baynard, have worked to bring the worlds of art, music and politics together for a variety of progressive and philanthropic causes.

On May 16, 2012, Meridian Hill Strategies brought Members of Congress, Congressional staff, leaders from the media and entertainment industries and members of the AAPI community are coming together to honor the life of legendary martial artist Bruce Lee at a reception and screening of the new documentary “I Am Bruce Lee.” The reception, which featured Members of Congress Rep. Jesse Jackson Jr. and Rep. Mike Honda, as well as executives from across the entertainment industry, took place at the Motion Picture Association of America’s theatre in downtown Washington D.C. The event was part of Asian Pacific American Heritage Month, and was co-hosted by Comcast, Viacom, Spike TV, the Bruce Lee Foundation, and Meridian Hill Strategies, which represents the Bruce Lee Foundation.

“It is my privilege to introduce legislation honoring the life and contributions of Bruce Lee and the Bruce Lee Foundation and to be with such a diverse group of leaders to celebrate Bruce’s legacy as part of APA Heritage Month,” said U.S. Rep. Mike Honda (D-CA). “Bruce Lee’s legacy and the Bruce Lee Foundation continue to be a global force that bring people together, break down barriers and create opportunities for young people – in keeping with the values of excellence, leadership and inclusion that we celebrate this month.”

“Being great is one thing, but being remembered is another thing,” said Jon Jones, Current UFC Light Heavyweight World Champion. “To be great, magnificent and remembered, you have to stand for something and change the world in a way. People love Bruce Lee all over the world, and I want to have that same impact.”

At the reception, Rep. Honda is presenting Shannon Lee, Bruce’s daughter and the President of the Bruce Lee Foundation, with a Congressional Resolution that he introduced honoring the contributions of Bruce Lee and the ongoing work of the Foundation. The Resolution is currently co-sponsored by Reps. Judy Chu, Jesse Jackson Jr., Raul Grijalva, Hansen Clarke, Roybal-Allard, Eni Faleomavaega, Laura Richardson and Gregorio Kilili Camacho Sablan. 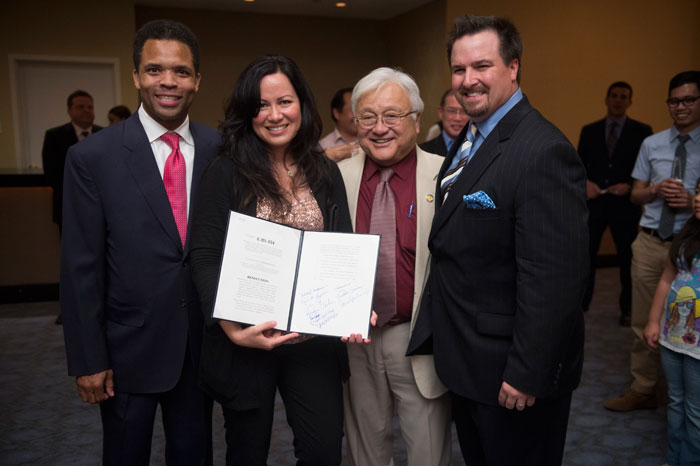 Meridian Hill President, Ernest Baynard with Bruce Lee Foundation President, Shannon Lee and U.S. Congressmen Mike Honda (D-CA) and Jesse Jackson Jr. (D-IL) as they present Shannon with the Congressional Resolution they introduced to honor the memory of her late Father Bruce Lee, and the work of the Foundation, which continues his legacy

In January of 2007, Meridian Hill, with the Owner Operator Independent Driver Association (OOIDA), hosted a celebration honoring the swearing in of Speaker of the House, Nancy Pelosi featuring the music of Jason Isbell 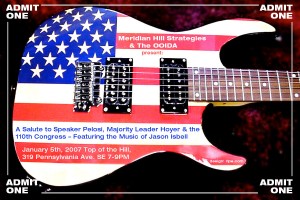 In 2004, Meridian Hill and Drive-By Truckers Founder and front man, Patterson Hood formed Rock For Democracy, a non-profit group dedicated to bringing musicians, artists, activists and voters coming together to increase the profile of progressive issues.

The work of Baynard and Hood were both featured on FOX News. 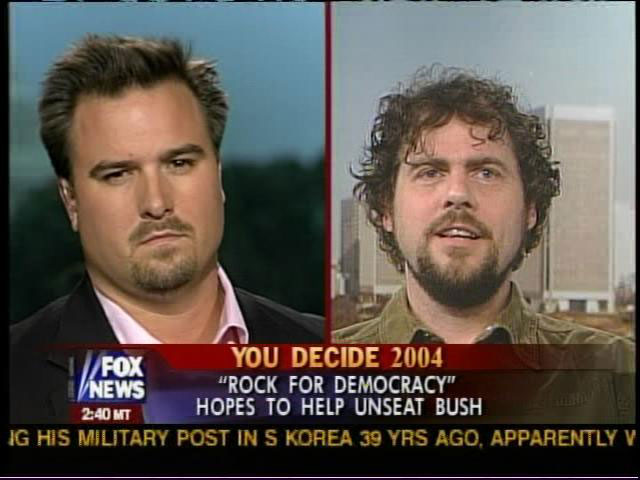 Members of the Drive-By Truckers performed at the Rock for Democracy party at the 2004 Democratic National Convention for a diverse audience that included elected officials, celebrities, music lovers, activists, and media. 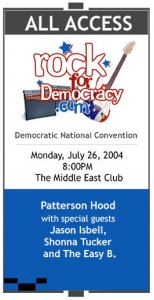 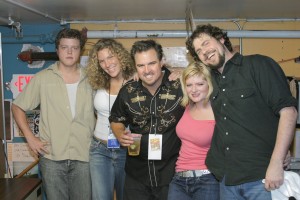 From left: Jason Isbell, Lindsey Baynard, Ernest Baynard, Shonna Tucker, & Patterson Hood of the Drive-By Truckers before they took the stage at the “Unplugged” Concert that Meridian Hill produced at the Democratic Convention in Boston in 2004.

In 2003, Baynard worked to bring Members of Washington’s business community and political professionals together from both sides of the aisle to enjoy New Orleans art and legendary Rebirth Brass Band at a benefit for a local and national treasure: D.C.’s own HR-57 Center for the Preservation of Jazz and Blues.